All you need is ubuntu

By now it’s pretty much old news that the new Ubuntu 8.10 has been released. I used my local-only account to sync my mirrors and download all the iso’s. Thanks a million to Andrew Alston from Tenet for providing the local Ubuntu mirrors, and making sure that they are kept in sync. I hope that he provides some stats on the network and servers over the last few days. I’m sure that if every country had such a well maintained and well ran local mirror, then the load on Canonical’s servers and bandwidth would be a fraction of what it usually is around release time. 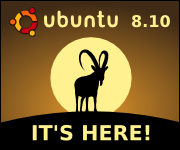 Today Ubuntu-ZA had the Ubuntu 8.10 Intrepid Ibex release party in (we think) 3 cities. I’m not quite sure if the Pretoria one happened, but we certainly had two good ones in Cape Town and Johannesburg. I dreaded the release party, I’ve had zero time to plan it and I was the event organiser for Jo’burg. It turned out quite good though, bringing together like-minded Ubuntu people is all that it takes to have a good release party. It’s really not difficult, if you haven’t had a release party in your area, just try and organise it for the next release. It’s easy. I wanted to get an Ubuntu branded cake for today (Jono Bacon suggested it in one of his posts), but I ran out of time and could only get a plain chocolate cake. Not being an Ubuntu cake didn’t deter anyone from eating it though :) 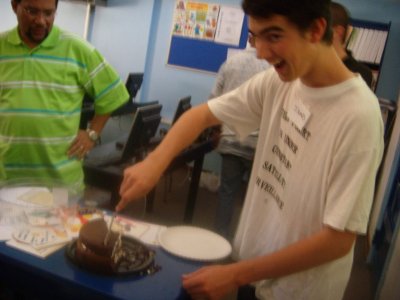 A week ago I blogged about leaving my full time job and starting my own company. Today is my first day as an employee of this new company. I have enough work to keep me busy for the next 6 months or so, and by then I hope to have expanded the company a bit and have about 3 or 4 employees in total. I want to grow it slowly and make sure that we are solid and give our customers the best service possible. We’re not just going to offer Ubuntu as the operating system we’ll be supporting, but ubuntu as the philosophy will be built into every service and every product we have to offer. The company’s name is Zanix. It’s a combination of “Linux” and “Za” (South African iso code). The website is still in a bit of a rough state. I’ll gradually be cleaning it up and making it nice throughout the month.

You really are who you are because of other people. I can almost trace all of my personality traits and my thoughts to someone who’s had an effect on me before. Every person I meet has at least some small effect on how I think and the things I do. When I realise that, I also realise that what I do have an effect on others. This is a big responsibility that all of us share. I believe that you should always live and lead by example, there’s always someone looking and it’s better to transfer the good parts of you than the bad. The last 6 months or so, I haven’t been a very good example.

I looked at some of my friends photos on Facebook a bit earlier. I saw some photos of some of my friends who earn less than I do, have less than I do, and yet I think they’ve been living a more fulfilled life. They keep themselves surrounded by the people they care for and love. I made a huge mistake believing my company when they said they wouldn’t require me to move to Jo’burg. I never really did move to Jo’burg, but they gradually brought me here more and more until they just assumed I do live here permanently now. I’ll still be in Jo’burg often in the future, but not as much as now. I’ll never let any one keep me away from the people I love again, no matter what kind of lies they tell me (lies may be a bit of a harsh word).  I have no hard feelings though, it’s in the past now. Since this afternoon after the Ubuntu release party I’ve felt light and happy, I’m incredibly excited about the future. I’ll end with one of my favourite quotes:

I guess I could be really pissed off about what happened to me, but itâ€™s hard to stay mad, when thereâ€™s so much beauty in the world. Sometimes I feel like Iâ€™m seeing it all at once, and itâ€™s too much, my heart fills up like a balloon thatâ€™s about to burst. And then I remember to relax, and stop trying to hold on to it, and then it flows through me like rain. And I canâ€™t feel anything but gratitude for every single moment of my stupid little life. – Lester Burnham, from American Beauty