The correct way to file bugs in Ubuntu

Today I read a post from Matt Zimmerman on the ubuntu-devel list where he says that filing bugs directly to Launchpad is not recommended and not best practice. Instead, Apport should be used whenever possible. Apport assists the user in preparing bug reports that will be as useful as possible to the developers who will have to triage and attend to the bug report in various ways. Many of us have told users to file a bug on Launchpad when they encounter bugs that should be reported. I’ve done it before as well, which is why I’m reposting the information to spread the word. Apport is good at picking up crashes in many programs and will automatically run and gather crash report data. Often though, bugs aren’t caused by crashes. Even so, you can still submit your bug reports using Apport:

Using the help menu in your program:

In most programs, you can simply click on the Help menu and click on “Report a Problem”. This will invoke Apport and prepare a bug report. If you’re a developer and would like to add Apport suport to your software, please refer to the Apport Developer Howto. 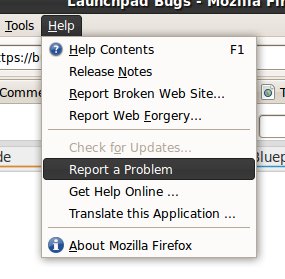 Perhaps the bug you have encountered prevents you from accessing the Apport menu, or perhaps it’s a program that for various reasons (such as being a command line tool) simply doesn’t have an Apport menu. In such a case, you can press alt+F2 and enter  “ubuntu-bug packagename” where packagename is the name of the package which the bug relates to.

How do you know which package your program belongs to? You can do a search in Synaptic (available from System -> Administration -> Synaptic) or you could check via the command line:

1. Which package does this file belong to?

2. Search through the APT cache:

The Ubuntu developers expect a big surge in bug reports following up to the release of Ubuntu 9.04 (Jaunty Jackalope), which is due on 23 April. When everyone does their part to make bug reports as good as possible, then there’s less work for the developers and bugs get sorted out quicker!