A Gnome summit just 2 hours away from where I live? Awesome!

A few weeks ago I noticed that the Gnome summit that usually takes place in Boston is happening in MontrÃ©al this year!  Being a Gnome user for more than a decade and having provided support for it to many people since then, I thought it would be great to pop in for a few hours and see what it’s about. The first session is just about to start and I hope to be back tomorrow as well. 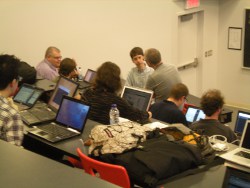 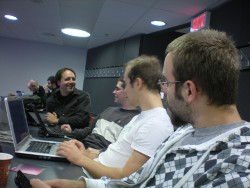 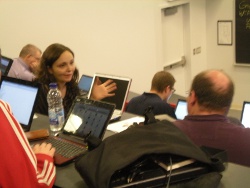 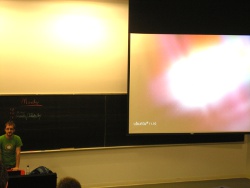 In Edubuntu 11.10 (Oneiric Ocelot) that’s being released next week, we’ve had to drop Nanny, Pessulus and Sabayon. That’s quite painful since they were great tools, but they didn’t work so well with all the Gnome 3 stuff and they don’t seem to be very actively maintained upstream at the moment. I would’ve gotten involved with those tools if I wasn’t already over-committed, I even considered doing something from scratch that integrates with the Gnome System Settings manager. My goal for now is just to get to know some people and learn more about the Gnome project and its goals. Maybe in a few months my situation will be different and I can commit some time to it. There’s really a need for administrating what desktop systems look like, how they work and how they are locked down in schools and other large deployments.

In Edubuntu, we’ve had to make some tough choices regarding the Gnome desktop since the 11.04 release. We want to keep Edubuntu a great system for schools, but also not stray too far from what a default Ubuntu system gives you. For 11.04 (natty) we decided not to use Unity by default, but provide it as an option in the installer so that early adopters could give it a try. For 11.10, we now install Unity by default and provide the Gnome fallback session as an optional installation. Our aim for Edubuntu is to support Gnome fallback mode as well as Unity. I’m really glad to see that Debian has decided to support Gnome fallback mode as an equal to Gnome shell in Wheezy without having to activate it in system settings first. It would be nice if Gnome upstream could stop calling it the ‘fallback’, but I guess they want to push Gnome Shell as the default as far as possible. Happy hacking everyone!