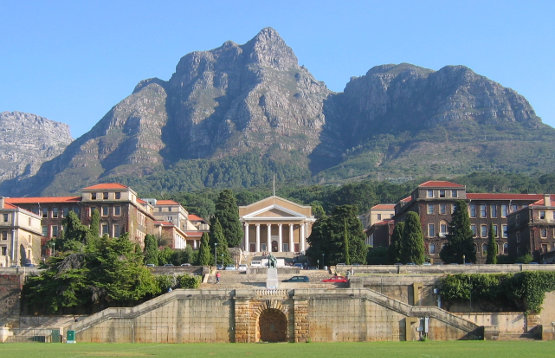 What an amazingly quick week that was

Our bid to host DebConf in Cape Town was accepted nearly 15 months ago. And before that, the bid itself was a big collective effort from our team. So it’s almost surreal that the first half of the two weeks of DebCamp/DebConf is now over.

Things have been going really well. The few problems we’ve had so far were too small to even mention. It’s a few degrees colder than it usually is this time of the year and there’s already snow on the mountains, so Cape Town is currently quite chilly.

Gathering some heat by the fire at the sports club while catching up to the world the day before it all started.

All Kinds of Quality Time

I really enjoyed working with the video team last year, but this year there was just 0 time for that. Working on the orga team means dealing with a constant torrent of small tasks, which is good in its own way because you get to deal with a wide variety of Debian people you might not usually get to interact with, but video team problems are more fun and interesting. Next year I hope to do a lot more video work again. If you’re at DebConf over the next week, I can highly recommend that you get involved! 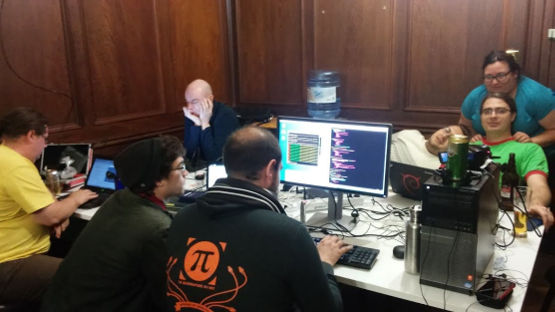 The first time I met Debian folk was early in 2004. I worked at the Shuttleworth Foundation as “Open Source Technical Co-ordinator” at the time, and Mark Shuttleworth had them over for one of the early Ubuntu sprints in Canonical’s early days. I was so intimidated by them back then that I could hardly even manage to speak to them. I was already a big free software fan before working there, but little did I even dream to think that I would one day be involved in a project like Ubuntu or Debian. My manager back then encouraged me to go talk to them and get involved and become a Debian Developer and joked that I should become highvoltage@debian.org. I guess that was when the initial seeds got planted and since then I’ve met many great people all over the world who have even became friends during UDS, DebConf, BTS and other hackfests where Debianites hang out. It gave me a really nice warm feeling to have all these amazing, talented and really friendly people from all over coming together in this little corner of the world to work together on projects that I think are really important. 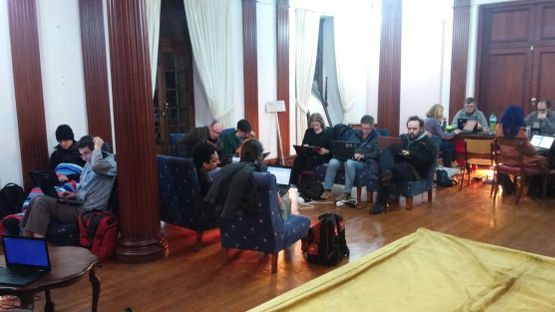 Back at DebConf12, someone (I don’t remember the exact history) brought a rubber chicken to DebConf who was simply called “Pollito” (“chicken” in Spanish). Since then the chicken has grown into somewhat of a mascot for DebConf. Back in 2012 I already imagined that if we would ever host a DebConf, I’d make a little of picture book story about Pollito. Last year after DC15, when bringing Pollito over, I created a little story called “Pollito’s first trip to Africa“. I was recovering from flu while putting that together and didn’t spend much time on it, but it turned out to be somewhat of a hit. I was surprised to see it in the #debconf topic ever since I posted it :)

We gave a tour of the campus on the first and second days and it was quite time consuming and there was no way we could do it every day for the rest of DebCamp, so on the 2nd day I smacked together a new rush job called “Pollito’s Guide to DC16“. The idea was that newcommers could use it as a visual guide and rely on others who have been there for a while if they get stuck. I wish I had the time to make it a lot nicer, but I think the general idea is good and next year we can have a much nicer one that might not be quite as Pollito focused. 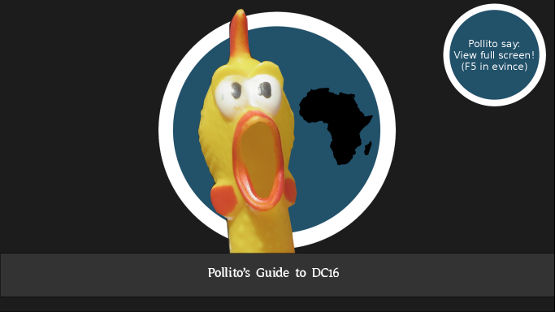 After all these years, I finally sat down and applied to become a Debian Maintainer, and the application was successful (approved yesterday \o/). Now just for the wait until my key is uploaded to the keyring. I haven’t yet had time to properly process this but I think once the DebConf dust settles and I had some time to recover, I will be ecstatic.

Everywhere I go, I see people installing a bunch of GNOME extensions on their Debian GNOME desktops shortly after installation using http://extensions.gnome.org/ (I noticed this even at DebCamp!). A few months ago I thought that it’s really about time someone package up some of the really popular ones. So I started to put together some basic packaging for AIMS Desktop around a month ago. During the last few days of DebCamp, things were going well enough with the organisational tasks that I had some time to do some actual packaging work and improve these so that they’re ready for upload to the Debian archives. The little DebCamp time I had ended up being my very own little extension fest :)

I worked on the following packages which are ready for upload:

I worked on the following packages which still need minor work, might be able to get them in uploadable state by the end of DebConf:

The actual packaging of GNOME extensions is actually pretty trivial. It’s mostly source-only JavaScript with some CSS and translations and maybe some gsettings schemas and dialogs. Or at least, it would be pretty trivial, but many extensions are without licenses, contain embedded code (often JavaScript) from other projects, or have no usable form of upstream tarball, to name a few of the problems. So I’ve been contacting the upstream authors of these packages where there have been problems, and for the most part they’ve been friendly and pretty quick to address the problems.

I couldn’t possibly sum up the last week and everything that lead up to it in a single blog post. All I can really say is thank you for letting me be a part of this very special project!