My foray into the world of LXC and RLXC

A few months ago, I started trying out LXC (Linux Containers). Before that I used to use OpenVZ, which is an older and more mature contextualization implementation. I was pleased with how well LXC worked and started replacing my personal OpenVZ hosts with LXC.

It worked great, but it had a few quirks. While LXC itself works well, the user scripts that ship with it has some space for improvement. The lxc-list command lists anything that’s a directory in /var/lib/lxc, so if you have a lost+found directory, it will list it as a container (This has since been fixed upstream). Also, in some cases it would list containers twice or not at all. I was a bit annoyed with that, since OpenVZ’s “vzlist” tool prints out a nice table of your containers along with their IP addresses and other information. Since it’s very trivial to implement what I want in a shell script, I went ahead and did just that and called it RLXC.

I also missed the “vzctl exec <containername> command” to execute commands in containers and “vzctl enter <containername>” to gain a shell inside the container, so I added some more functionality to it so that I could configure ssh keys for these containers and use “rlxc enter” and “rlxc exec” like I used to do with the OpenVZ tools, but by using SSH.

I also realised that there are others too who wanted similar improvements in the LXC scripts and decided to continue improving RLXC and making it public.

I spoke to StÃ©phane about my ideas at the time and he introduced me to python3-lxc that he introduced on his blog yesterday. It provides Python bindings for liblxc, so I took the advantage of that and mostly re-implemented RLXC in Python and called it LLXC. The name doesn’t particularly mean anything, I’m open to suggestions for what to call it, if anyone cares.

Here are some screenshots that explains some of it better than I could do in words: 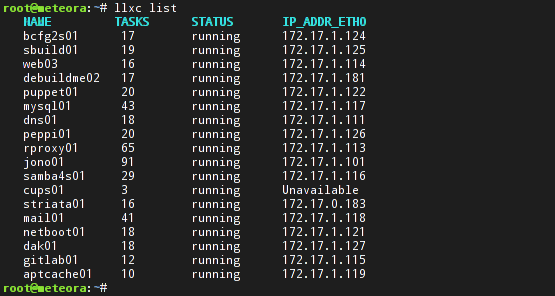 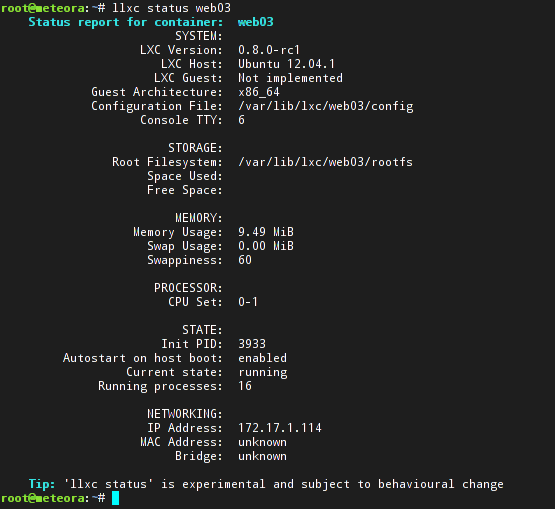 How to get it

As StÃ©phane mentioned in the python3-lxc blog entry, the API hasn’t yet been finalized and llxc itself is in an early state and many changes are planned, so it’s definitely not meant for production use yet, but since we believe in “release early, release often” in the free software community, here goes…

Currently, llxc.py itself is *very* Ubuntu specific and its only been tested on Ubuntu 12.04, but that will be fixed once more of its kinks have been ironed out. Some people are also working on getting python3-lxc on other distributions, which will help a lot.

To generate the ssh keys used for ssh interaction between the containers, you need to run “llxc gensshkeys”.  The “enter” and “exec” commands also rely on your containers being in dns or in your /etc/hosts file, at least for now, which you may have to configure manually.

There is a lot that I’m planning to add, mostly to scratch my own itches. These include:

I’ll have some packaging for this available soon and work on making more things work right out of the box, updates will follow. Also, feedback and patches are very welcome!