If there’s one thing that I’ve had missing in my life for way too long, it’s hacking on small silly stupid amusing little things. When I was young I used to write dozens of little pointless programs a week and forget about them, only to found them a few months later and be incredibly amused by them.

This afternoon I noticed that one of my machines didn’t have my default .bashrc loaded, which colourises (or ‘colorizes’ for Americans or ‘colourizes’ for Canadians) my shell so that I know on which machine I am so that I don’t accidentally do something silly like reboot the wrong host. One problem I’ve had with this is that there are limited colours available that makes sense to use for a shell prompt. Right as I was thinking this, I was looking at my Byobu screen sessions and thinking “Hmm! I like those logos, maybe I could use them in my shell!”.

So in just a few minutes I had a little script to help you configure those for your shell. Here is a screenshot of the shell logos in action. On my laptop I use a red background when I have a root shell:

This is what the shello script looks like that sets it up: 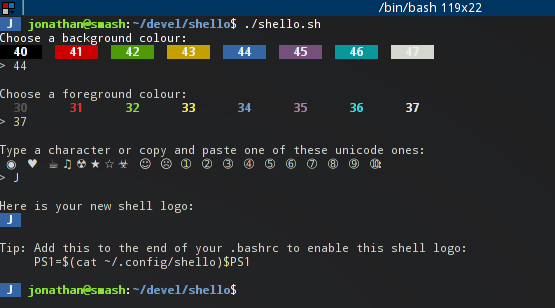 I might get bored by seeing it soon and get rid of it, but at least I had a little fun with it.

If you’d like to try it out, then you can get the script right here: https://github.com/highvoltage/shello

It doesn’t do anything like validating input yet, I’d also like to add something that creates some kind of a checksum of your hostname and choose a unicode character based on that. Maybe I’ll finish it up this weekend, or maybe I’ll have new things to write about!

Tags: # Copyright (c) 2012 Jonathan Carter # This file is released under the MIT/expat license. # # Permission is hereby granted# distribute# EXPRESS OR IMPLIED# TORT OR OTHERWISEand to # permit persons to whom the Software is furnished to do soand/or sell copies of the SoftwareARISING FROMbashbyobucopyDAMAGES OR OTHER LIABILITYFITNESS FOR A PARTICULAR PURPOSE AND NONINFRINGEMENT. # IN NO EVENT SHALL THE AUTHORS OR COPYRIGHT HOLDERS BE LIABLE FOR ANY # CLAIMfree of chargeincluding # without limitation the rights to useINCLUDING BUT NOT LIMITED TO THE WARRANTIES OF # MERCHANTABILITYmergemodifyOUT OF OR IN CONNECTION WITH THE # SOFTWARE OR THE USE OR OTHER DEALINGS IN THE SOFTWARE. echo "Choose a background colour:" for colour in $(seq 40 47); do echo -e "\e[1;"$colour"m $colour \e[0;37m \cpublishscreenshellosubject to # the following conditions: # # The above copyright notice and this permission notice shall be included # in all copies or substantial portions of the Software. # # THE SOFTWARE IS PROVIDEDsublicenseto any person obtaining # a copy of this software and associated documentation files (the # "Software")to deal in the Software without restrictionWHETHER IN AN ACTION OF CONTRACTWITHOUT WARRANTY OF ANY KIND